General information:
Besides combat and fairy skills, the game features life skills which allow players to interact with the environment with the use of special tools. They require special skill points to be learned, life skill points.
These points can be obtained by doing Story quests (one point every few quests), or by finishing the "Language Barrier" quest (5 points).
They can be separated as "Primary" life skills and "Secondary" life skills. This guide will focus on primary life skills, while the guide Production System will explain secondary skills in detail.

Primary life skills:
These skills involve harvesting various materials from the environment, in the form of chopping trees, mining ores, fishing from fishing yards, or salvaging sunken ships.
These materials (alongside others) are used for secondary life skills, in order to create a finished product. Additionally, each primary life skill is linked to a secondary skill. The secondary skill cannot be learned unless the primary is learned and it cannot be leveled up past the primary skill's level.

In general;
These skills can be purchased for 1,000G from the Grocer in any town and be learnt as long as the player has at least 1 life skill point. Spending additional life skill points will level the skill up.
Trees, Ores, Fishing Yards and Sunken Ships are all game entities which act as monsters.
Using a life skill on them will start decreasing their HP 1 by 1 and has a chance to yield drops on every hit, until their HP decreases to zero. They do, however, respawn.

Additionally, these entities all have their levels, from 1-10. In order to use life skills on them, the corresponding skill has to be of the same or higher level.

The primary skills are:

Axe
Secondary skill which relies on it: Manufacturing

In order to chop a tree, simply use the woodcutting skill or click on any tree and the chopping will commence.

-Axe can be purchased from Blacksmiths. 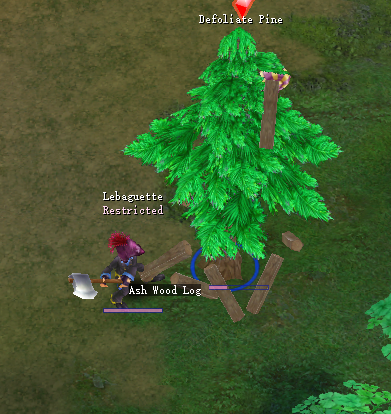 Notes:
-Players cannot attack or cast most skills while having an Axe equipped.
-The tool

Gold Axe makes woodcutting more efficient as it doubles the yield. It is obtainable as an occasional reward from certain events.
-The

Legendary Tree of Fortune is a special tree which has specific packets as its drop. It cannot be destroyed and can sustain multiple characters chopping it at once.

Information: Allows players to mine minerals from various Ores around the world.
Skill book:

Pickaxe
Secondary skill which relies on it: Crafting

In order to mine, use the mining skill or click on any ore and the mining will commence.

-Pickaxe can be purchased from Blacksmiths. 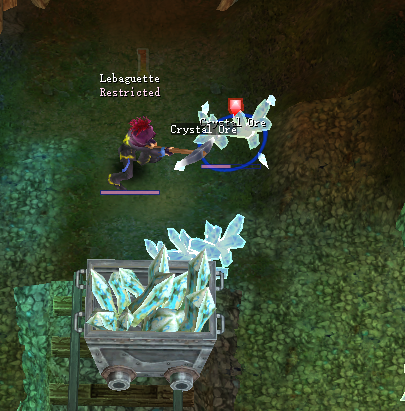 Notes:
-Players cannot attack or cast most skills while having a Pickaxe equipped.
-The

Meteorite is a special stone which can be mined for unique drops. However, it requires a special tool,

Alloy Pickaxe to be mined. It cannot be destroyed and can sustain multiple characters chopping it at once.

-Alloy Pickaxe is obtained as a reward from finishing the "Language Barrier" quest or in the Item mall for 29 Rums. It cannot be repaired.

Woodcutting and Mining were skills which were done on land. The other two life skills, fishing and salvage, are sea skills. That means that they require a boat in order to be used as well as choosing the correct Ship component when building a ship.

In order to fish, use the fishing skill on a fishing yard, and the fishing will commence (This is visualized as a net appearing in front of the ship.) 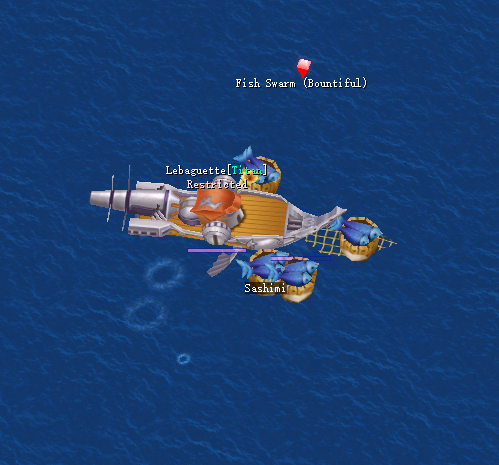 Notes:
-Unlike with Woodcutting or Mining, there is no way to double the yield from Fishing.

In order to salvage, use the salvage skill on a sunken ship and the salvaging will commence (This is visualized as chains appearing in front of the ship.) 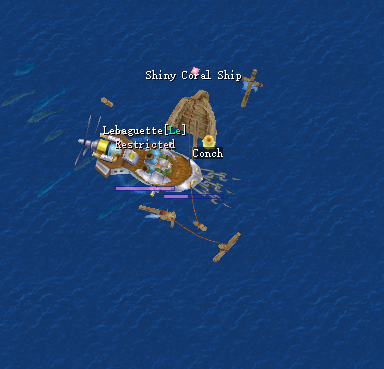 Notes:
-Analyze is a secondary life skill which does not exist in the current game version.
-Certain sunken ships may drop items which go to the Cargo (Ship inventory), make sure to check both inventories!
Top