General information:
Gem combining is a feature in the game, which allows players to combine lower level Gems or Refining Gems into higher level ones. This feature is crucial, as players are able to upgrade the gem level in their equipment by using higher level gems.

Requirements:
The requirements are seemingly simple:

Gem Composition Scroll can be bought at

The process:
Once the requirements have been met, it's time to combine the Gems. This is done at, once again, Grocery - Amos by selecting the 'Combine' option. 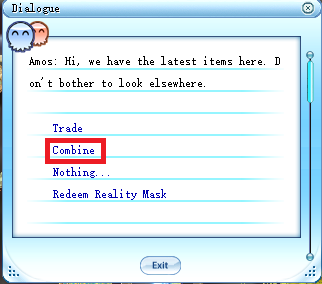 A window will pop up and all the required items are to be placed within their respective slots; Composition Scroll on the top slot, and the Gems to the left and right slots, like so: 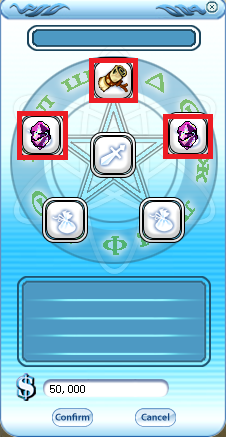 After that, clicking "Confirm" is all that remains, and the Gems will be combined into a 1 level above Gem. This can be done up until level 5, which is the current maximal Gem level. All the same rules, fees and requirements for regular Gems apply to Refining Gems as well.

Rates:
Combining higher level Gems into even higher level ones has a smaller success rate than combining lower level ones. This means that Combining can fail. And should this happen, both the Gems, Scroll and Gold will be lost.

The rates are as follows:


In order to increase the success rate of higher level gems, the item

Red Combining Fruit has to be used. As the description of the item says, it increases combining rate for 1 minute. Meaning that any number of Combines that a player does within this time period will be more successful. It will increase the success rate by 20% for all gems except for Refining Gems, where it will automatically make the success rate 100% (for all levels)

The Fruit is obtainable only as a Quest reward from Story Quests. Additionally, it's worth nothing that it's wise to use the Fruit in order to combine multiple Gems Lv3 or above within one Fruit's time frame, as it's more economical.

Statistics:
Higher level Gems are not only riskier to combine, but also require way more Gems than lower level ones.

Code
Or simply by referring to the table below: