General Information:
Fairies, or Pets, are special game entities which serve as a player's companion in the form of an item. They are cute little critters of various shapes and colors which fly above the character when activated. 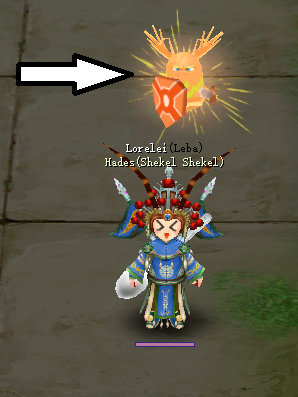 In order to activate a Fairy, it has to be placed on the second inventory slot (first row). Deactivating the fairy is similar, simply remove it from the slot and it will stop flying. 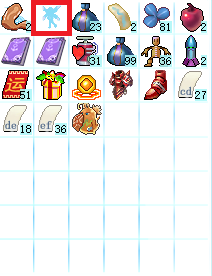 When a Fairy is activated, it can give numerous bonuses to the character, primarily stats and bonuses if it has any skills learned.

Fairy Stats:
Each Fairy has a few stats worth mentioning.

Stamina - Fairy's life. This will deplete over time and if it reaches zero, the pet will die until revived. In order to increase its stamina when it's been lowered, certain items have to be used.

Pet Food , an item obtained from monsters will restore 5 stamina, while Rations (either

Auto Ration ) which will restore 50 stamina upon double clicked and fed to the fairy.
The difference between Fairy and Auto Rations is that Auto Rations will automatically activate when the Fairy's stamina goes below 50 (doesn't work when player is stalling). The stamina is equal to 100 + 20*fairy level, capped at 640 (at lv27 and above)

Growth - As stamina is depleted, growth is increased. Growth indicates how close the fairy is to be eligible to be leveled up. The time needed for the fairy to lose one stamina and obtain one growth is called a growth cycle. This time is equal to 60 secs until lv27, at which point the time increases by 5 secs. (65s at lv28, 70s at lv29 and so on).
The Growth needed is equal to 240*fairy level, capped at 6480 (at lv27 and above).

Level/Stats - The level of the fairy indicates how many stats it gives, while which stat(s) it gives can be seen between the Fairy's name and its Stamina/Growth.

I.e. "Agility: 7" means that the fairy gives 7 Agility while activated.
Which stat(s) the Fairy gives depends on which fruits it has been fed when it was leveled up.

Leveling a Fairy:
In order to level a fairy up, its growth has to be full and a special level up fruit has to be used. There's five different Fruits which can be used to give one of the five different stats. Both "normal" (+1 stat) and great (+2 stat) versions exist of each fruit. There is a chance that the leveling may fail, and the fruit goes to waste alongside the growth depleting to half. This tends to happen around lv13-20 of the fairy.
Regular fruits cost 9 Rum in the Item Mall, whereas Great fruits cost 29. Although Great fruits are more efficient, they are more costly as well. However, using them on higher levels is actually more efficient as the extra level saves a lot of Rations.
These fruits are:

Although each fairy can be fed up to 4 different fruits, hence have up to 4 different stats, it is highly recommended to breed pure pets only, meaning ones with one stat only, mixing stats is never a good idea when it comes to pets.

Fairy Skills:
There are several skills which can be taught to the fairy, although each can only learn up to three. This requires special skill books which can be used on the fairy. Although the fairy has 3 "slots" for skills, each skill will use a random slot. Meaning that one skill can overwrite the other. So learning all 3 skills is a fair investment and requires preparation.

The skills are:
The Fairy can also be taught life skills, which do not interact with the character directly. They instead increase success rate for their respective skills. They are obtained at

Fairy Merchant and still take up a fairy skill slot, despite being somewhat different than normal skills.

The skills are:
Each of these skills will as mentioned above, consume a fairy skill slot, and is often only used on pets "dedicated" only to production.


1st generation Fairies:
Fairies are generally split up into two categories, 1st generation (1st gen) and 2nd generation (2nd gen). 1st gen fairies can undergo the Fairy Marriage process (stay tuned) in order for a 2nd gen pet to come to life. These 2nd gen fairies have a special trait which will be talked about later.
1st gen fairies aren't very interesting and everything that needs to be said has already been said. They are mostly used as budget fairies for newer players and to breed 2nd gen fairies.

In order to obtain one, the item called

Fairy Box has to be used, and the player will obtain a random fairy. Although they are purchasable from Item Mall at 9 Rums, there is an abundance of them since high level bosses drop them and it is an item considered useless to high level players.

There is a total of ten different 1st gen fairies. Do not be fooled by their description, there is absolutely no difference between them, other than how they look. 3 of these are obtained from Fairy Box at a high rate, four at a low rate, and three can only be obtained from the likes of Tiger Gamble.


Fairy Products:
Over time, Fairies accumulate certain items in the player's temporary bag which can be used for various purposes. 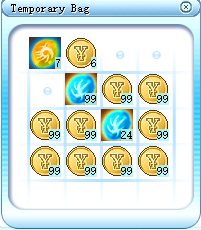 Fairy Coin is the most common one. One is obtained every 2 growth cycles (1 growth cycle for 2nd gen Pets). It is used for Manufacturing, Cooking, Crafting and Tiger Gambling.

Elven Signet is the second most common one. One is obtained every 20 growth cycles on average (one after 30 and two after 30). It is used for Cooking primarily.

Elven Royal Signet is the rarest of these items. It is used for very high level cooking.

Additionally, all of these items can be exchanged at