General Information:
Forging is an in-game process which allows players to insert Gems into their Equipment, steadily increasing their power as more Gems are forged. It's an expensive process which is why it's highly recommended to do it on strong or "end-game" Equipment.

Players must first forge a Lv1 Gem into a free Socket in their Equipment, after which the Gem level can be upgraded by forging a higher level Gem of the same kind. Gem levels, however, cannot be skipped. (Lv1 Gem first, followed by a Lv2, then by a Lv3 and so on.)
If the Equipment has another empty socket, a different Gem can be forged, starting from Lv1.

The whole Forging process is done with the help of a special gem;

Refining Gem , commonly referred to as "Ref". It must be the same level as the Gem that's being forged. More information on that a bit later.

Since there's different types of Gems (Attribute Gems, Unique Gems, Black Dragon Gems), there is a vast number of ways one can obtain them.

Note that there is more methods of obtaining Gems and Refining Gems, however the above-stated are the most common and most efficient ones.

The forging process:
Once the requirements have been met, players should go to 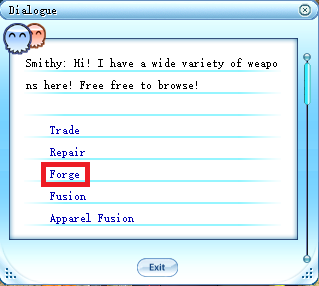 The Equipment has to be placed on the top slot, the Gem on the middle slot, and the Refining Gem on the bottom slot, as so: 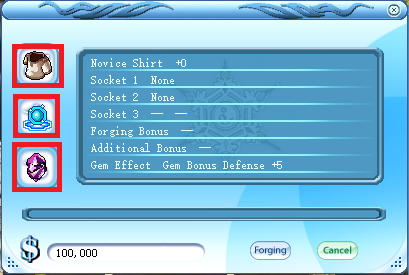 The end result; the Novice Shirt will now give an additional +5 Def when worn, though this bonus is visible in the Gem area of the equipment, rather than in its base stats.

Notes:
-The current maximal Gem level is Lv5.
-A given equipment can only have 2 sockets, meaning that only 2 different Gems can be forged in it. Choose wisely!
-Using a higher level Gem (or Refining Gem) than necessary is a waste, because the game will treat it as if it were lower level. E.g. If the Equipment has a Gem on Lv1; using a Gem and/or Refining Gem of Lv3 or above will still result in the Equipment having that Gem on Lv2 after the forge. Once again, Gem levels cannot be skipped!
-The total level of Gems in a forged equipment is visible in the form of "+X" next to the equipment's name. I.e. An equipment with a lv1 Gem in it will be "+1", an Equipment with two Lv2 Gems in it will be "+4" and so on.
-The forging fee is equal to which "+" (Explained above) a player is getting his Equipment to * 100,000G. Meaning that it doesn't depend on which Gem level is being forged, rather on the amount of times that the equipment has been forged.

Rates:
The cost of forging increases exponentially, since the higher the Gem level, the higher the cost it is to get it to the next level; plus the ever increasing Gold cost as well as the need of having a Refining Gem of the same level.
To add insult to injury, just like when combining, forging higher level Gems has a tendency of failing. When forging fails, the Gem, Refining Gem and Gold all go down the drain, though the Equipment remains unharmed.

The rates are as follows:

Though the rates may seem absurdly low for forging Gems above Lv3, there is a way to increase them, for a short period of time. The item

Blue Forging Fruit , upon usage, will increase those rates by a flat 40% (Lv4 Gem will have 85% success rate, Lv5 75% and so on).
This fruit is obtained from Story Quests, and since its supply is scarce, using it to forge multiple Gems within that 1 minute period is more economical than forging just a single Gem.

Additional information:
-The Gem bonuses will be increased by Apparel Upgrade (Strengthening)
-Gems can be removed from Equipment via Gem Extraction ("Pliering")
-Gemmed Weapons will glow, starting from +1. The glow increases when the Weapon is +4, +7 and +10 respectively, with each weapon type (Sword, Staff, Gun, etc) having its own unique glow progress.
-Additionally, Gems can either emit a Yellow, red or Blue glow, making for some pretty fancy weapon glows when combined!
-Different Gems can be forged in different Equipment. Each Gem will have a description on it, hinting at where it can be forged.
-Some Gems have the same icon in-game (i.e.

Gem of Rage ), careful not to get scammed!
Top