Excerpt from the Argent newspaper 4th month of year 20XX

Day 3
"The Researchers Team from Shaitan, with the participation of Little Daniel, released a sensational statement. What is true and what is fiction ""
"...'The next few weeks, the world will enter a state of serious shock. It will change the very foundations of the world'..."

Day 6
"A Mirage appeared above Argent! The city and its citizens were all inverted! What did we see and what threats wait for us?!"

Day 8
"A mass unrest occurrs among people due to a recent trade ban of Forsaken City Artifacts. Is this incompetence or subtle provocation?"
"...'They can't do that to us! How will we earn gold now?!' - protesters commented..."

Day 9
"Victory! The trade ban had been lifted, but the consequences are still here."
"The market is still under a lot of discussion."

Day 14
"The Researchers Team from Shaitan, along with Little Daniel fixed the link with the stable mirage. There are suspicions that this is same world we saw above Argent last week"
"...'We compared the records of the incident and found many objects which are the same, but from a different point of view. That's why we believed it might be the same world'..."

Day 17
"Sensational! They were right indeed. Answer came from Mirage citizens. Is this a new horizon or a new danger?"
"...For now the link is too unstable to claim anything for sure, but we strongly believe it will stable soon enough..."

Day 19
"The popular Shaitan Silk & Clothes factory shares details about a new collection"
"...'They're on fire!' - a group of clothing testers commented..."

Day 20
"A Cross-World meeting of the Researchers takes place. The link is finally stable! What should we expect next?"

Day 21
"Quite curious for a cross-world meeting to take place - Daniel commented"
"...'And have next facts. As we've recently found out, we opened the link right into some tavern named "Port Royal". It was truly a scary place. It was bought by the Researchers who set their headquarters there'..."
"...'From their side, there were a few rifts as well. The first one lead to a small island in the ocean, with only one turtle inhabiting it. So they named our world 'Tortuga' and have a laugh'..."

Day 22
"The Security Service closed a manufacture of counterfeit Metal Fragments. More than two thousand items were seized and eight people were put under arrest."

Day 23
"The Magnetic field is now stable. Fish have returned to their old habitats. Fishermen are estimating their losses."

Day 24
"The Researcher Team's summary. City Council Statement"
"...'Yes, that's true, the portal is stable now. Furthermore we believe this to be only a first of many. Rifts within worlds will surely happen more often, until we one day live in one single world'..."
"...'This is a serious challenge for our countries. The world changed, and this is our new reality. We are now preparing for a delegatory visit to Port Royal'..."


Server Rates:
Level caps:
The leveling phase will move after the first 10 players reach Hardcap but not sooner than a week after the server launch date, will be announced accordingly.

I know there isnt a lot of players playing on the main server of PKO, so I would just like to ask the playersbase for any information on how many players are considering playing on the new server. I for one will definetly try it

Developer said:
The leveling phase will move after the first 10 players reach Hardcap but not sooner than a week after the server launch date, will be announced accordingly.
Click to expand...

Leptis said:
Wow I'll bang my head if someone reaches lvl70 in a week haha
Click to expand...

You might wanna get something to cover ur head with

if there's one thing i'm not doing, then its underestimating pko players
Bar is life ~

Thx so much PKO team,love you all & for the Remoo,mayby coz of corona,now we have somedays 900 ppl online at this server too

Count down timer link above.

Hi, what about mall, are u going to change any prices for new server?

Drop here to say found a problem..
I got problem when start game 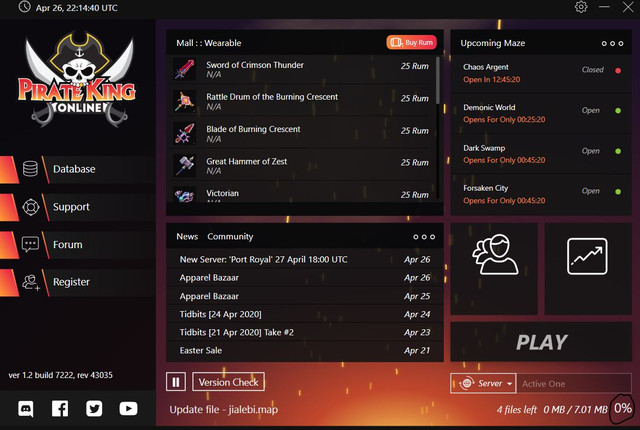 I was try to close and start again, but always same, long time waiting and no process update from 0%. I try ping gate and gated, it normally

could change this server 3x exp or something different to call new ppl, and make different server inside PKO... would be nice. But nvm

Please use Cumulative patch in such a case.
J

Just create a new server so whales dump more money in trying to level up, this is the same lazy tactic IGG used as a cash grab and ultimately caused their downfall. You should create new content instead of this garbage move.

Just create a new server so whales dump more money in trying to level up, this is the same lazy tactic IGG used as a cash grab and ultimately caused their downfall. You should create new content instead of this garbage move.
Click to expand...

Many players where asking, so we did it as they wished to.

Leptis said:
Wow I'll bang my head if someone reaches lvl70 in a week haha
Click to expand...

I would be afraid xD
L

No way... That is mind-blowing hahaha
You must log in or register to reply here.
Top